In a person’s schooling years, a high IQ is certain to make them pass with flying colours. We all hear about Albert Einstein having the greatest IQ, we all hear that intelligence is something that takes us far in terms of educational achievement. While it is a vital skill set of life, there is something else that matters…

Emotional intelligence. This may sound as an oxymoron to some, as we often tend to take emotions and intelligence as two very different things. But really, these two things put together makes something that guarantees overall success in life. It has been defined as “the ability to monitor one’s own and other people’s emotions”. This includes the ability to manage emotions, accept flaws, having empathy for others, and having certain social skills.

People having high IQs normally tend to be born that way, naturally having the ability to think quickly, do mental calculations, work with maths, logic, numbers, etc. While emotional intelligence is something we can work to improve on, almost like developing a skill. Although some people are naturally more emotionally intelligent than others, you have the flexibility to gain more EQ over time.

I have already talked about the importance of controlling our emotional triggers in my last post- learning to identify emotional upsurges, and pro-actively dealing with them.

Along with that, it is also very important to understand the feelings of others, which is something we call empathy. While this is much easier said than done, it means trying and looking at things from the other person’s perspective, putting yourself in their shoes and trying to think or feel like them. “Be humble enough to know you’re not better than anyone, and wise enough to know that you’re different from the rest!”

EQ and IQ are certainly not adversaries of each other. It is very much possible to have high levels of both, and that is what leads us to a more authentic, successful, and happier life.

In our body, our 5 senses are sent up to the brain in the form of electric signals that pass between the peripheral nervous system (nerves and neurones) and the central nervous system (up the spinal cord to the brain). They are first experienced ‘emotionally‘ in the Limbic area before moving to the Frontal Lobe or the rational processing area (responsible for encoding complex logic and rational information). The Limbic and Frontal areas communicate and work in tandem with one another, this is the source of EQ. But the challenge is that the limbic region can easily hi-jack the frontal lobe because it processes the data before it reaches the frontal lobe. This is why it is important to practice emotional intelligence. “Emotional intelligence isn’t about getting rid of emotions. Rather it’s about having control over them and using them to their advantage.” 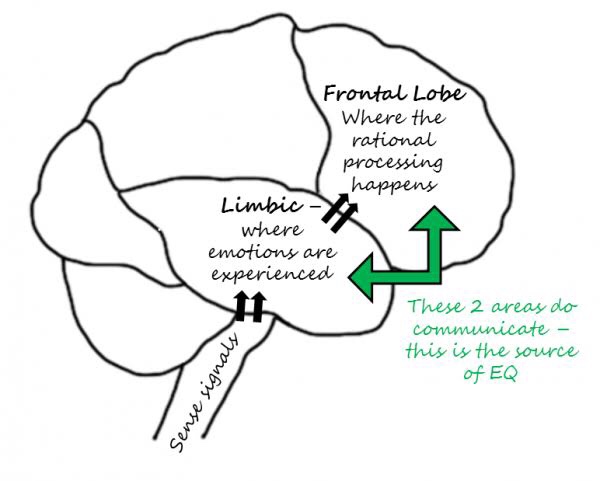 And me being a person who is particularly devoted to subjects like science and mathematics which require cognitive intelligence, I have started to realise the importance of having an equally well maintained emotional intelligence.

I am 16 years old and love having some fun with philosophy and discovering the world around me! View all posts by SaaniaSparkle 🧚🏻‍♀️

159 thoughts on “Is IQ more important than EQ?”